The Needham Boys Volleyball team completed their second straight undefeated season on Wednesday, June 15th after winning the Division 1 State Championship in a three set sweep over Westford Academy!! The Needham Channel was at St John’s Prep rolling with multiple cameras during the game and afterwards for the celebration! On Friday, June 17th, you can watch the debut airing of the game at 7pm on our Community and HD Channels, as well as our livestream here at needhamchannel.org. The HD Channel can be seen on Verizon Fios Channel 2129, while the Community Channel is 29 on Verizon, 9 on Comcast and 15 on Astound. To see the livestream online here, scroll up and click “WATCH ONLINE” on the right side of your screen.
TNC Sports Producer Kristen Connors had highlights from the title game on the “Needham Channel News” and you can see that video, embedded from our YouTube page here:
We’ve been calling Needham “Volleyball Country,” as this is the fourth straight state title won by the Boys and Girls teams, starting with the Girls in 2019, completing an undefeated season for their first title. Due to Covid, the next championship wouldn’t be decided until last spring, when the Boys didn’t lose a single set, en route to the title. Then this past fall, the Girls won again, losing just once before taking home their second title. In fact that one loss is the only one handed to Needham Volleyball since the Boys lost a playoff game to Newton South in the spring of 2019.
Starting with Coach Dave Powell’s original group in the mid 2010s, who won a state title in 2015, Needham’s Volleyball program has become the most elite in all of Massachusetts, with Girls Head Coach Courtney Todesco joining Powell this year to helm the Boys JV team, while also assisting the Varsity as well. After the big victory, our cameras were rolling on the Rockets’ celebration, with all of our content posted to our Social Media accounts, i.e. Facebook, Twitter and Instagram. We’ve embedded many of those posts below:

Star Outside hitter, Ben Putnam talks to us about what it's like being apart of such a dominant program, and how it felt to win his last game in a Rockets jersey @NeedhamVB212 pic.twitter.com/xIr5n2tTRO


"Timid goes home" Setter Raymond Weng says was one of the @NeedhamVB212 mantras this year that led them to a 2nd straight title pic.twitter.com/7YFSLG9qxV

Head Coach Dave Powell talked to us about winning back to back titles, and especially what this senior class has meant to him @NeedhamVB212 pic.twitter.com/Cvs0VdLLCY 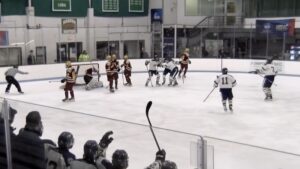